Preparations for changing the underworld continue. A Grimstone has been added to the game this week as part of the deepest dungeons. In addition to the block itself, a lot of items from it have also been added.

Grimstone generates at great depths (below 0) and is slightly harder to mine than regular stone. You can make the same blocks from it as from ordinary stone, including slabs, stairs, a fence, and more.

Work continues on world generation and ores placing. In the new snapshot, large underground caves and flooded caves will be less common. Mineshafts in deep dungeons can now be supported not only by columns, but also by chains. Changes have also been made to the distribution of ore types by mining depth. However, this is not the final version yet, the developers are looking for a balance.

Ore blocks have received minor graphical changes. Now they differ not only in color, but also in shape. Only the diamond ore remained unchanged. If you don’t like these changes, then download the Good Old Ores pack with old textures. 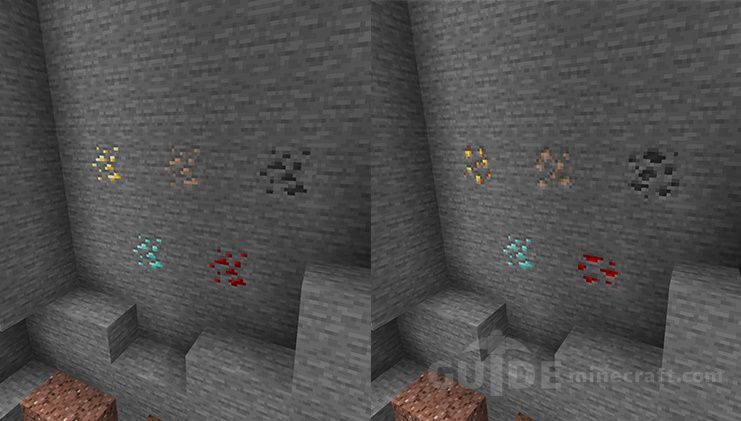 This week’s updates were in preparation for the “cave” part of version 1.17. The underworld has received significant changes: new caves have been added, the maximum depth has been increased….

This week the snapshot was released in preparation for the releasing of a new underground biome called Lush Caves. New cave blocks and several plants have been added to the…

Glow Squid and Glow Lichen Have Been Added in Snapshot 21w03a

The first snapshot of 2021 delighted players with a new mob! It was the glow squid that won the last vote. Also added to the game is glowing lichen –…