How to tame animals in Minecraft

Many animals in Minecraft can become useful companions and loyal friends. In this guide, we will tell you which mobs can be domesticated, how to tame pets in Minecraft and breed them. And as a bonus, we’ll recommend some interesting mods to expand the taming capabilities.

Note that only neutral animals can be tamed. Mobs that are hostile by default (like a zombie or a dragon) cannot be tamed. Also, you cannot “make friends” with creatures you have already attacked again.

How to tame a horse

Taming horses in Minecraft does not require any resources. You only need to find a suitable horse and right-click on it, not holding any objects in your hands. After that, you will be on horseback, but you will not be able to control the horse. In addition, after a while she will throw you off. These steps must be repeated until hearts appear above the horse. After that, she will stop throwing you away, but she will still be uncontrollable. 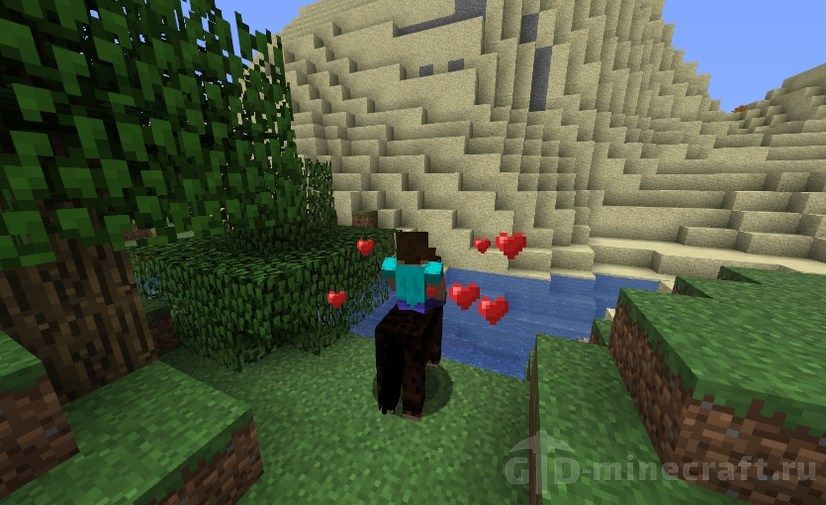 To use it as a mount, you need a saddle. It is not crafted, but can be found in chests or from merchants in the village. In addition to the saddle, you can wear armor on the horse, which will significantly increase the survival of the animal. 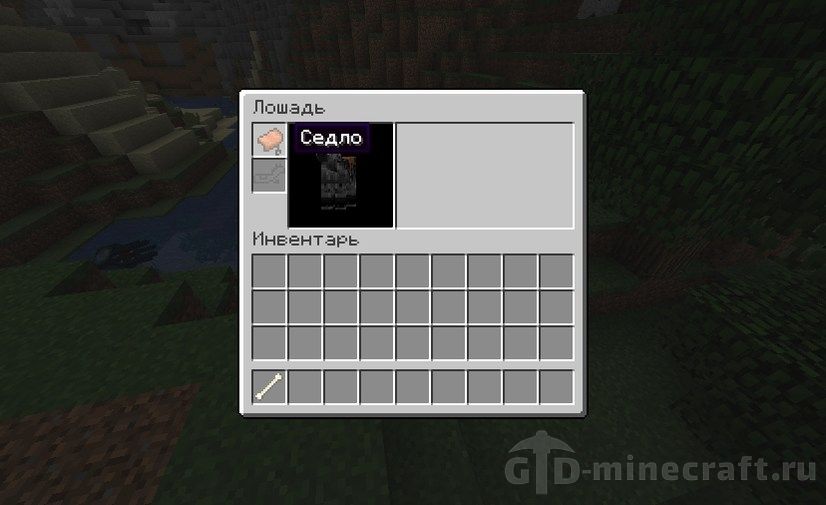 Having tamed several horses, you can breed them. To do this, feed two animals with a golden carrot or a golden apple. As a rule, foals have a higher speed and HP than parents. Also in Minecraft you can find donkeys who are tamed in the same way as horses. And if you cross them with a horse, then a mule will appear that can carry two full chests. But it cannot be used as a mount. 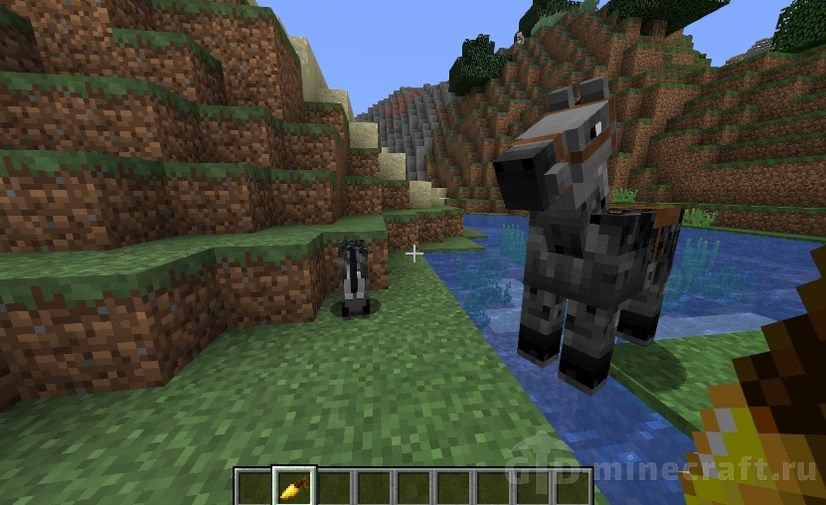 How to tame a wolf

Wolves in Minecraft can be excellent defenders, because they have high speed and great damage. To tame them, you need to get the bone that falls when killing a skeleton. You need to take it in your hand and right-click on the wolf. After each bone eaten, the wolf can be tamed with a probability of 1/3. With 12 consecutive attempts, the wolf is tamed with guarantee. 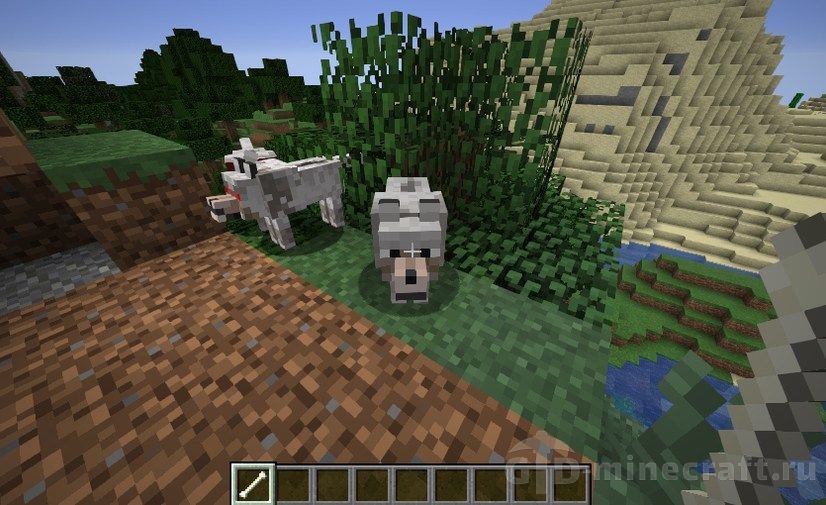 A tamed wolf differs from a wild one in both its characteristics and appearance. It has larger eyes and a raised tail. In addition, he will have a red collar, which can be repainted, using any dye on the pet. A tamed wolf is much stronger than a wild one. He has 5 times more health and attacks 2.5 times stronger. Thanks to this, a pack of wolves will help you fight even with the most powerful enemies. 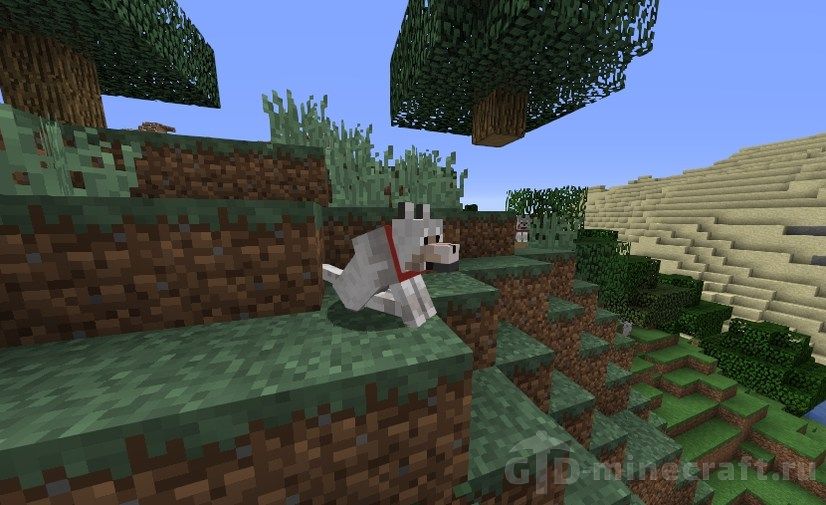 There are currently no restrictions on the number of tamed wolves in Minecraft. You can create a flock of any size. In this case, it is much more profitable to breed already tamed wolves than to look for new ones. For the appearance of the wolf cubs, it is necessary to give two of their wolves one piece of meat or fish (they must have the maximum level of health). There is no need to tame a newborn pet, it will immediately have a collar on it. 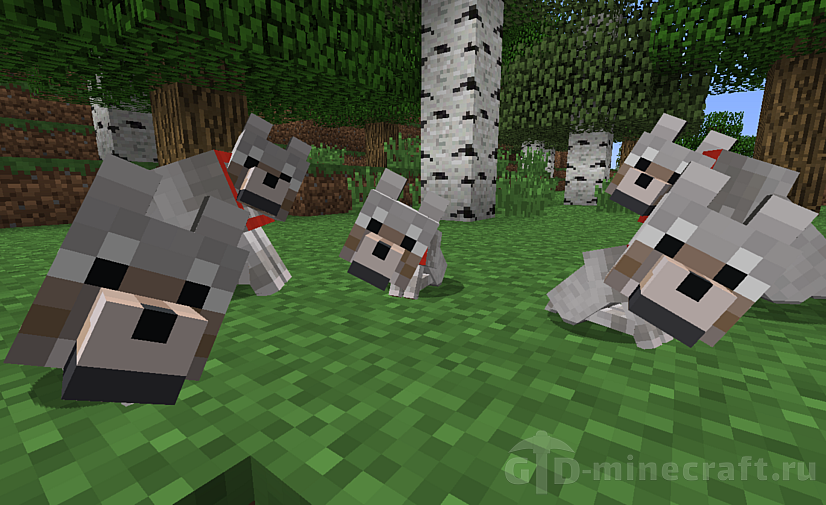 In versions of Minecraft up to 1.14, players have the opportunity to tame the ocelot, turning it into a domestic cat. Taming this mob requires not only resources, but also a certain behavior. 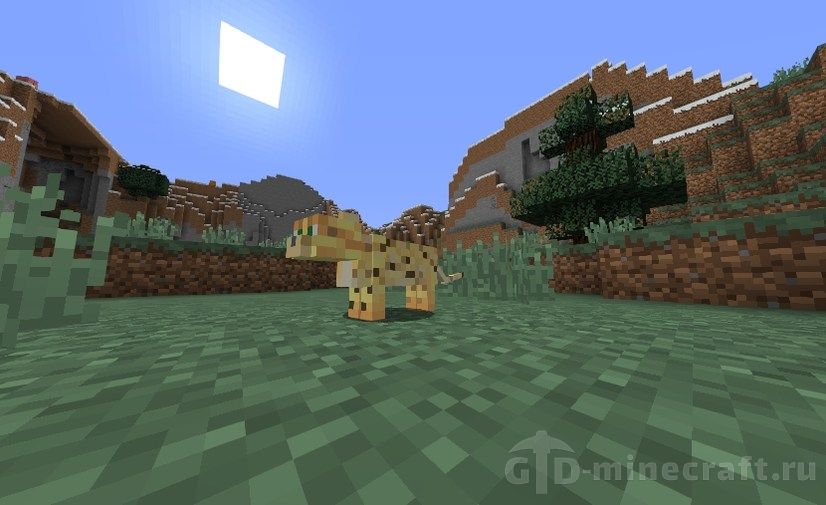 Ocelots are very shy and run away with a sharp approach of the player. To interest them, you need to slowly approach (preferably with the Shift button pressed), holding raw fish in your hands. Ocelot himself will begin to gradually approach you, but will immediately run away if you get another item or make a sharp movement. As soon as the animal comes quite close, you need to feed him by right-clicking. The probability of taming is about 50% for every fed fish. It is recommended to take more bait, so as not to miss the opportunity, because a second attempt will take a lot of time. If successful, the appearance of the ocelot will change, and it will become more like a domestic cat. 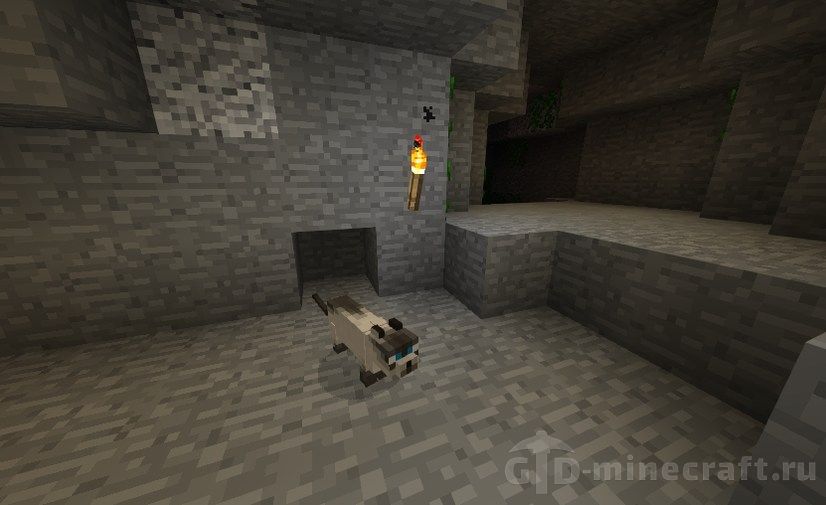 The tamed ocelot in Minecraft is a lot like a wolf, but it has some advantages and disadvantages. Cats are more wayward, which is expressed in such features: 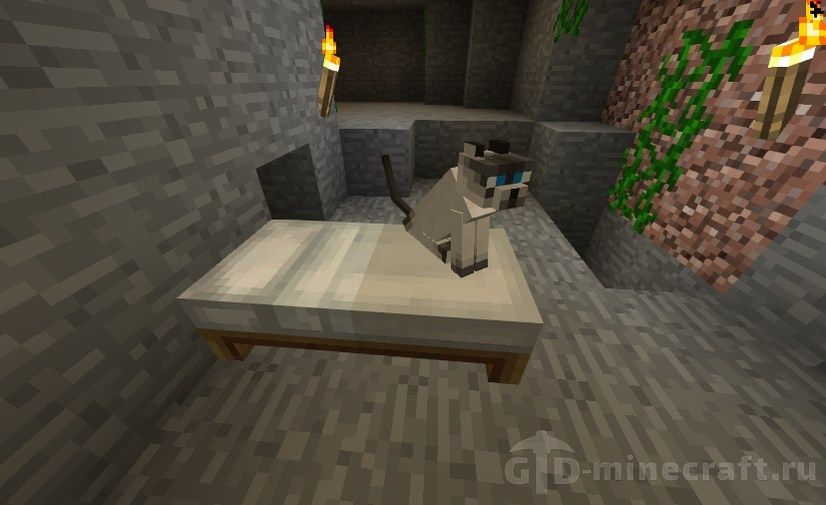 Starting from version 1.14, cats and ocelots are different creatures. Now the ocelots cannot be tamed, you can only gain their trust so that they are not afraid of the player. Cats are represented in 11 colors and spawn near the villages. The color is determined randomly, but on the full moon and in the witch’s hut, only black cats with orange eyes appear. Taming cats is a little easier, they run up to the player with fish almost without fear. Also in version 1.14, they, like wolves, multiply after feeding their favorite food. In addition, now they scare away not creepers, but phantoms. 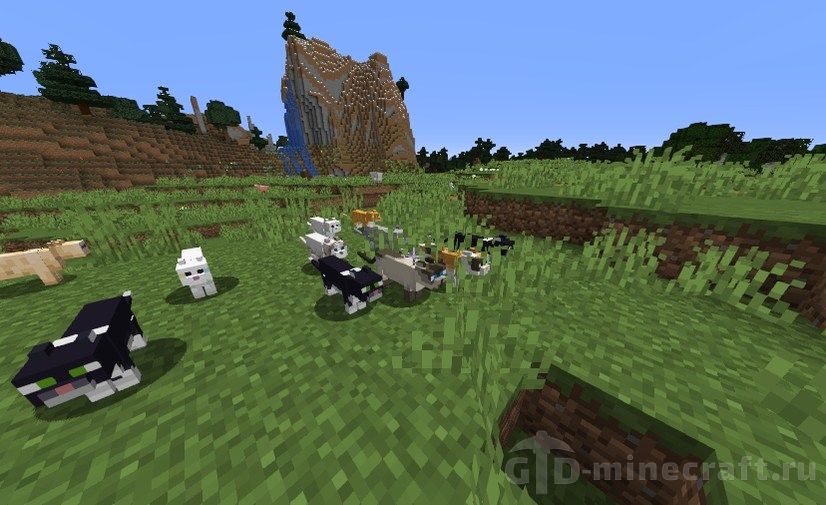 How to tame pigs, cows, sheep and chickens

These mobs cannot be fully tamed, but you can lure them into a pen to limit movement and control breeding. All of them play an important role in Minecraft surviving, as they can be a source of valuable resources. For example, you can get wool from sheep, milk from cows, and eggs from hens. Mushroom cows are of particular value. Even one such mob is an inexhaustible source of food, because taking a bowl in your hand and right-clicking on such a cow will give you a mushroom stew. 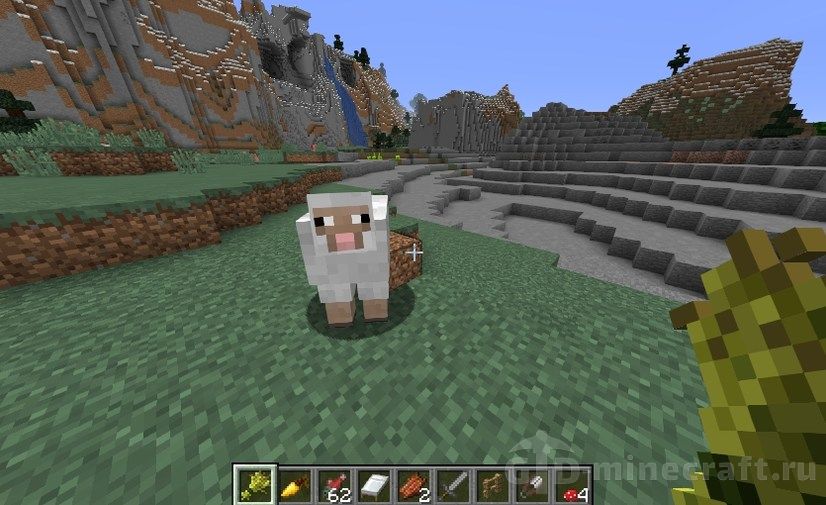 Luring animals into the fence is very simple. Sheep and cows (including mushroom) are interested in wheat, pigs – potatoes, carrots and beets, and chickens – any kind of seeds. The same resources are used to multiply the corresponding mobs. Make sure that there are no holes in the fence through which animals can scatter around the terrain. 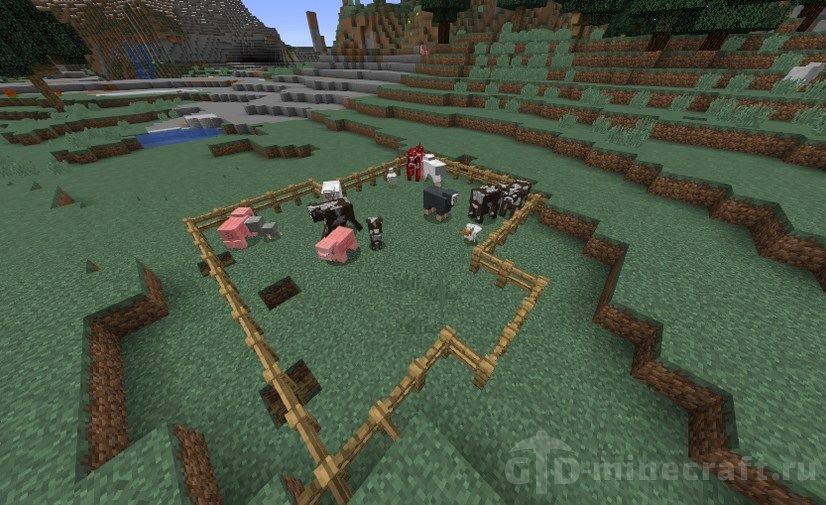 The pig is the only mob on this list that can be used as a mount. To do this, put a saddle on it. However, it is not controlled in the usual way. To make her move, you need to pick up a carrot on a fishing rod. After that, the pig will run in the direction of the player’s gaze. 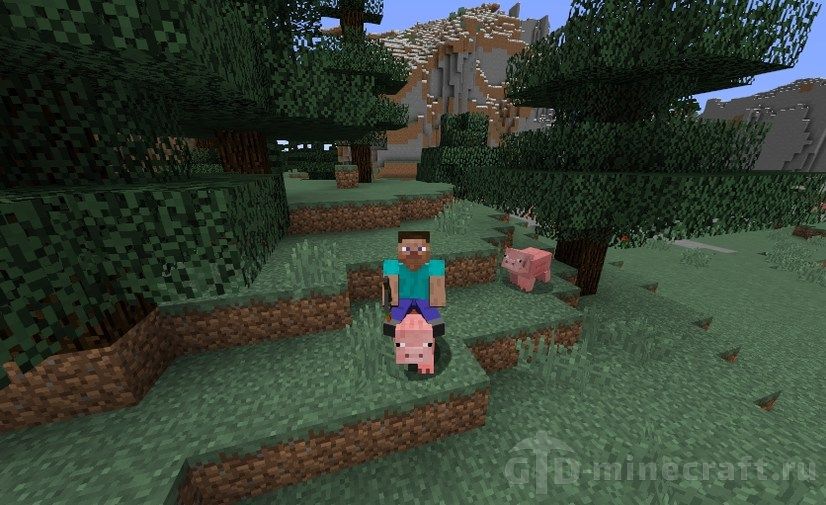 How to tame a parrot

Parrots are found in the jungle biome. It is much easier to tame a parrot in Minecraft than to get to it, because these birds sit on the tops of trees and moves very often. If you can get close enough, then just give the parrot any seeds. After that, he will follow you, and can also sit on your shoulder if you stand next to him for a while. You can continue to feed the tamed bird with seeds, but there is no practical benefit from this. She will also eat cookies, but from such food she will get the effect of poisoning and will die soon. 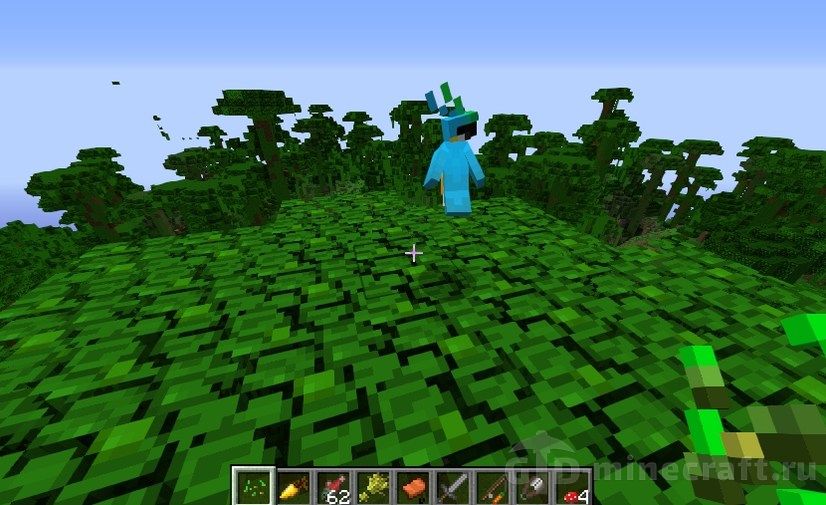 Parrots have not only decorative, but also practical applications. They repeat the surrounding sounds in a slightly distorted form, and also try to indicate to the player the location of the hostile mobs. 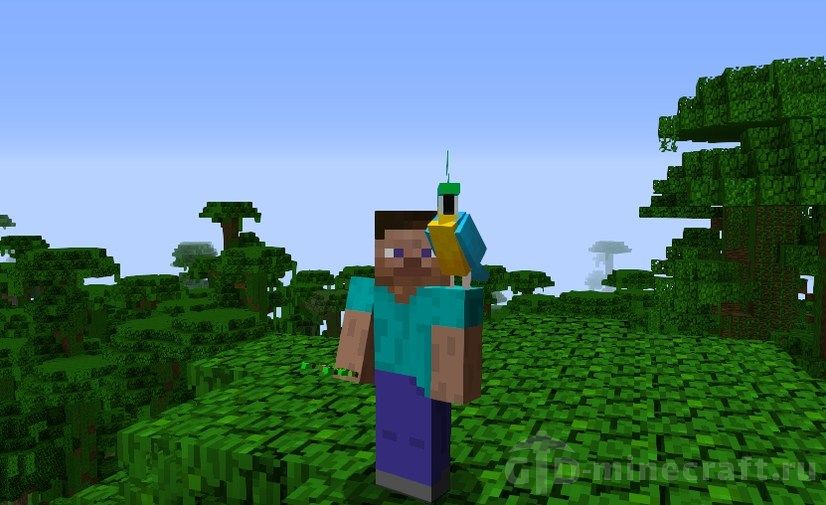 How to tame a llama

The llama in Minecraft is tamed in the same way as a horse. You need to climb it until an animation with hearts appears. However, after taming, she will not go after the player, nor will she allow herself to be controlled. It can be used as a cargo animal, previously equipped with a chest. Depending on the strength indicators, the llama can have from 3 to 15 cells for objects. 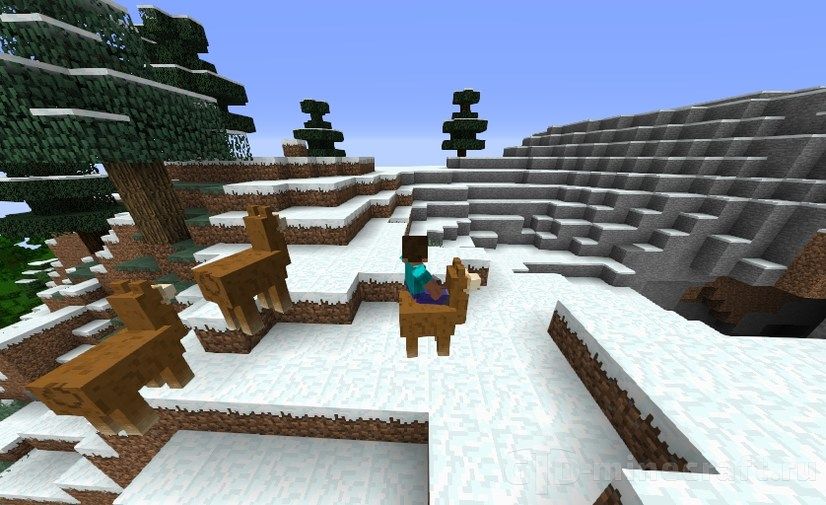 If you put a leash on the llama, then 10 other nearby llamas will follow. Thus, you can create one or more caravans and carry a huge amount of loot. You can wear any kind of carpet on llamas that fits in the armor slot. Depending on the color, the carpet on the llama will receive a special pattern. 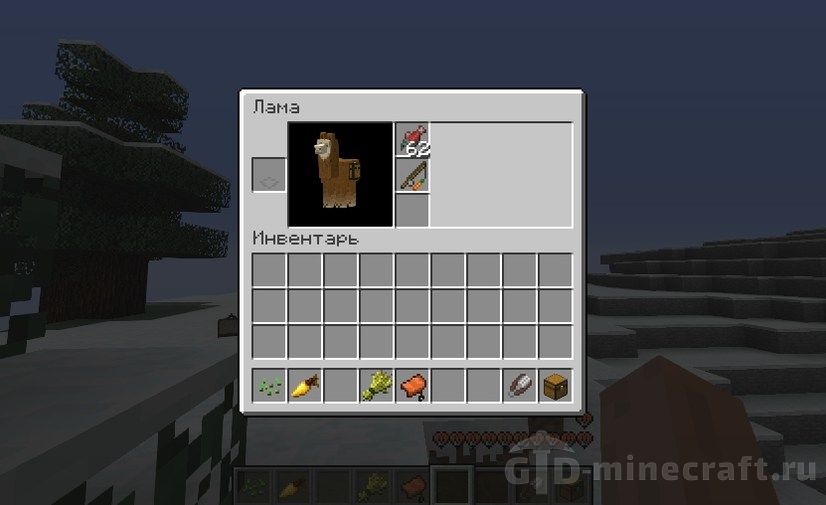 Like most other animals, llamas can be raised with their favorite food – haystacks. The cubs receive the coloring of one of the parents, as well as a random indicator of strength, which cannot be higher than that of the strongest of them. 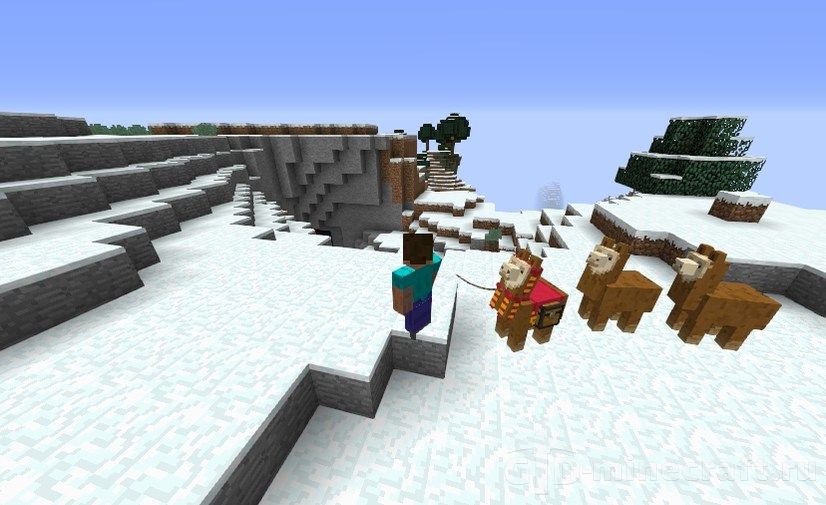 If you have few tame animals in Minecraft, then use the Mo ‘Creatures mod. He adds a huge number of mobs, most of which can become player companions. Moreover, after installing it, it will be possible to tame creatures that in the vanilla version could not be domesticated. For example, you can get a personal spider and even ride on its back. 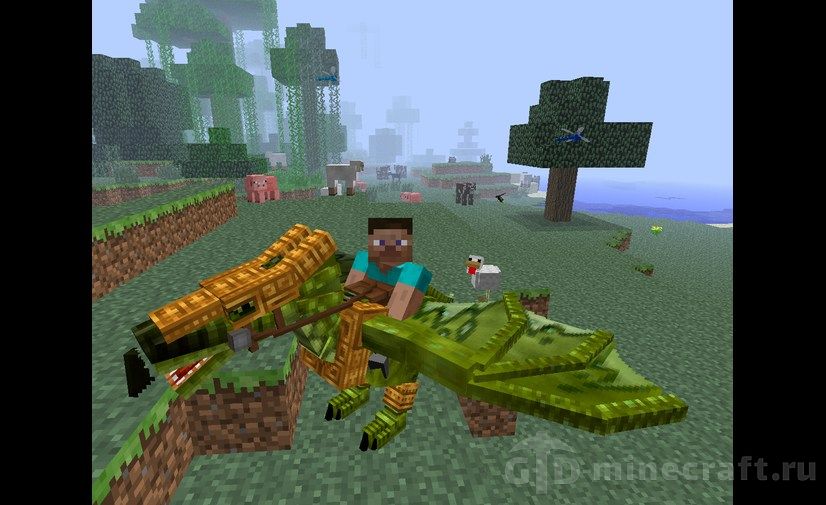 If you like to deal with tamed wolves, then be sure to download the Sophisticated Wolves mod. He makes their behavior more reasonable, now they are less likely to die due to ridiculous accidents and cease to accidentally push the player into the lava or abyss. In addition, you can create a booth for them and even take it with you when you carry it. 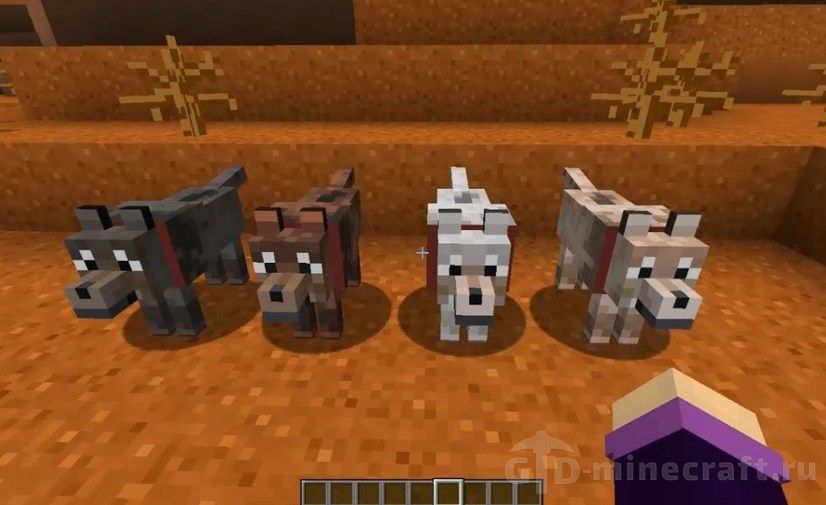 Many players are interested in how to tame a bat in Minecraft. Unfortunately, the vanilla version does not have this feature, but it is well implemented in the Pet Bat mod. To do this, you will need to feed the mob pumpkin pie. After that, you can pick it up and pump it, increasing the amount of HP and damage. 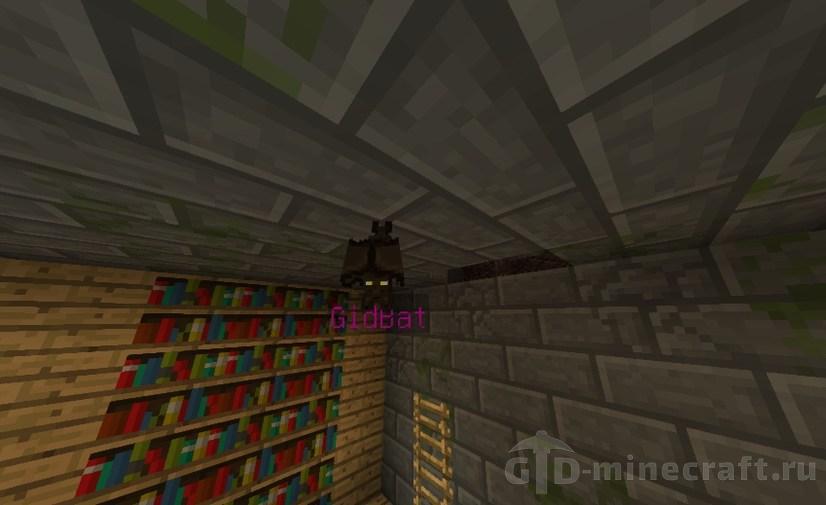 Taming dragons in Minecraft will not work, but thanks to the Dragon Mount mod, you can find their eggs and grow your own. The adult dragon will become an incredibly powerful companion. Moreover, you can saddle him and take off. 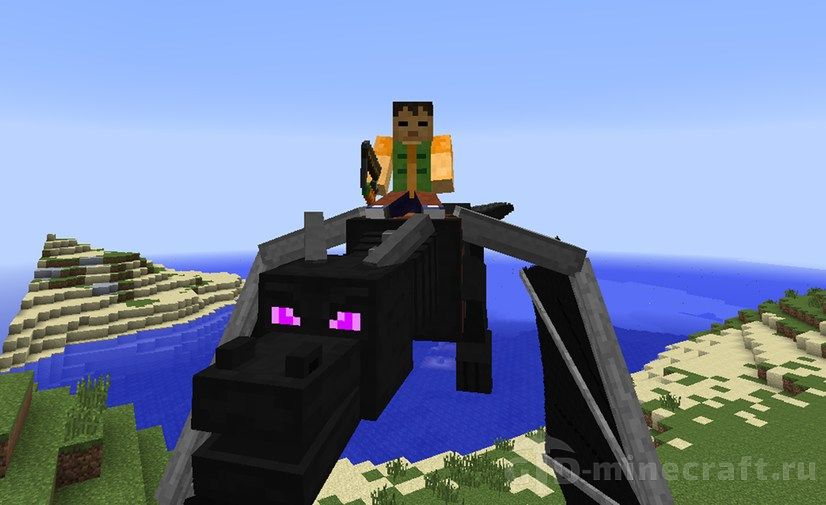 For those who want to quickly find a good horse, the Horse Debug Info mod has been created. With it, you will see the speed and endurance of a horse by going into standard debugging mode (F3 key by default). A simple Friendly Fire mod will allow you to disable damage to your pets.

In honor of the first of April in 2020, a very interesting snapshot was released, in which the developers decided to add “all at once.” Now, over a two billions…

How to remake old resource packs for new Minecraft versions

Version 1.8.9 is still the best for PvP lovers and most cool resource packs are made just for it. There are a huge number of high-quality packs that do not…